We know it has been a while since we have written about any updates to our customers, but that is because we have been hard at work! We teased last week about big changes for Old Hickory and we want to give some updates on why some of those big changes are being made. This post will hopefully list out some of the recent successes of the company, which we feel blessed to be able to share. We always thank God first, but we also would not be here without the customers that buy our products! YOU are why we are able to share this information. So thank you!

Two years ago, Old Hickory Regular Barbecue Sauce was the only sauce coming out of our offices in Smackover, going to maybe 5 local stores (the two El Dorado Brookshire stores and a couple downtown El Dorado shops).

Today, Old Hickory has 7 sauces that are now distributed throughout South and Central Arkansas, North Louisiana, and East Texas. It is sold in all the Brookshire's and Super 1 Foods in Arkansas and all the Mac's stores in Arkansas. There are other smaller chain stores throughout the area that carry them as well. Our recommendation is to call your local grocer to check if they have it in stock. We have some fantastic distributors in Bill and Ralph's out of Springhill, LA that allow us to keep growing.

For those not in the area, you can go onto our website and purchase all of our sauce products. In addition, we are also getting the product set up to be available through walmart.com

This allows Big Daddy's to be available in around 150 of their stores through distribution from their warehouse in Tyler. In addition, Big Daddy's is in the process of being set up as a potential deli item to be sold in Brookshire's and Super 1 Foods delis! This means that when you walk in to get a plate lunch at Brookshire's or Super 1 Foods, you should be able to ask for Big Daddy's Hot Water Cornbread as a side item.

You can find the store locations at the link below: 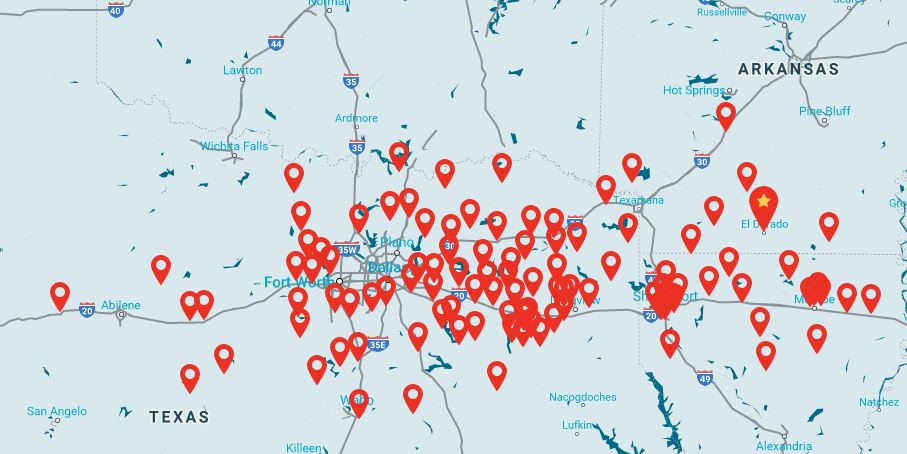 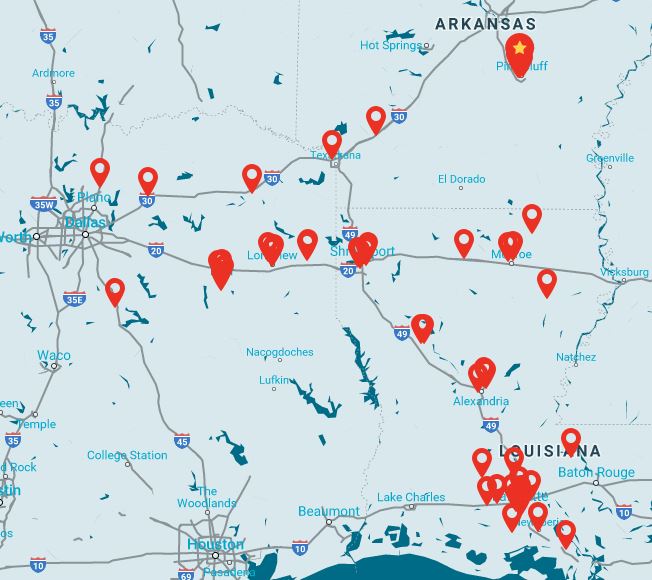 In August of 2018, we also presented Big Daddy's to Brookshire Brothers, based out of Lufkin, TX. They have brought in Big Daddy's as a deli item, and the small retail bags into their frozen food sections. So the product will be available in those Brookshire Brothers stores. You can find one of their store locations near you at the link below.

In addition, they loved Old Hickory Gourmet Pepper Sauce so much that they also brought the pepper sauce in as their new sauce for their delis, so it will be available in any of their stores that have a deli!

Find their locations at the link below. The picture shows the locations of their stores.

We also want to let everyone know that Big Daddy's is also a warehoused item for other grocery chains such as Mac's Fresh Market. Their store locations can be found in the link below. Mac's grocery it a great place to shop and has been carrying the cornbread in all of their locations for a while now. As we mentioned, the sauces are sold in all the Mac's stores in Arkansas.

So what is the mess outside our offices about? Well, as a result of all this, we need more space. So the tease of a Facebook post was unfortunately not a restaurant as some of you may have thought, but instead is us moving production of Big Daddy's Hot Water Cornbread to Smackover, AR. Since Old Hickory took over production of the product, our plans have been to eventually consolidate and have everything under one roof. The time is now as we are maxing out on our current capacity in Parker's Chapel just outside of El Dorado. We were fortunate to be able to take the side portion of the building where our offices are in Smackover to build a new production area for Big Daddy's.

Big Daddy's Hot Water Cornbread, just like Old Hickory Sauces will be produced in Smackover, but will always and forever be an El Dorado, AR original product with roots deeply planted in South Arkansas.

As we already have said, thank you to all of our customers who make this possible!

Try it out! We hope you love Old Hickory as much as we do!