"Since 1944, people have been raving about a delicious sauce made by a restaurant man for his special customers. Now that barbecue sauce, Old Hickory, is available to you! Old Hickory Barbecue Sauce is taken from a spicy, secret family recipe of the Deep South and though it's produced in quantity, it still tastes custom made. Whether you like your barbecue hot, smoky, or regular, you'll agree Old Hickory adds a zest of quality taste to ordinary cooking!"

Old Hickory originally started as a barbecue restaurant that was known throughout South Arkansas for their great barbecue beans and barbecue meats. Over the years, many people have asked if Old Hickory is affiliated with that Old Hickory Restaurant based in El Dorado, AR and we love seeing people's faces light up when we tell them we are! Even though the original family closed the restaurant, the original sauce recipes were kept alive and produced through Old Hickory Sauce Company.

Since the origination of Old Hickory Sauce Company, there have been many highs, but also a few lows as well. When Safeway operated heavily in the Arkansas area, Old Hickory Barbecue Sauce was a warehoused item, with Old Hickory Sauce Company typically selling around 100 cases per month to Safeway stores. At its height, the company had 2-100 gallon kettles with an automated line that operated out of the old Mountain Valley Spring Water plant in El Dorado, just down the road from the original restaurant.

Unfortunately, towards the late 1980's Safeway stores pulled out of the Arkansas region, which left Old Hickory without one of its biggest customers. The next 15 years saw many changes in ownership of the local grocery stores throughout South Arkansas, which made it difficult for Old Hickory to remain a constant item on grocery store shelves. As a result, throughout this time various pieces of equipment and materials were sold off by the owners so that the company could remain viable and still serve the local markets and its loyal customers.

In 2003, the original owners decided it was time to part ways with the Old Hickory brand and the company was purchased by James Phillips Jr. and James Phillip Sr. Both residents of the Smackover-El Dorado area who were very familiar with the Old Hickory brand. At this time there were just a few local grocery stores selling Old Hickory Barbecue Sauce and these two men, who historically had worked in the oil fields most of their lives, kept the sauce company local while making significant investments over the years in the hopes of bringing the company back from the brink.

James Phillips Sr. and James (Jim) Phillips Jr. with some of their first bottles of Old Hickory that they made in 2003.

Over the next decade-plus, a new facility, new kettles, bottle fillers, labeling machines, and heat tunnels were purchased in order in order to be able to meet demand as Old Hickory sought new customers. In the fall of 2016, Old Hickory regained the Camden market with the Brookshire's and Mac's grocery stores in that area, along with the Mac's Fresh Market in El Dorado. At that time, this was a significant jump, nearly doubling the small local market for Old Hickory.

2017 was a very big year for Old Hickory! We launched the website and made a big effort to let people know that Old Hickory Sauce Company was still around. The Old Hickory Hot Barbecue Sauce was brought back in May of 2017 along with the Old Hickory Cooking Sauce, which is similar to a sweet barbecue sauce with more flavors and ways to use it. In addition, in July of 2017, Brookshire's Grocery Company approved Old Hickory to begin selling its products in 18 of their stores in the East Texas, South Arkansas, and North Louisiana areas. This more than tripled the number of stores that were selling Old Hickory sauces.

In August of 2017, Old Hickory acquired Old South Cornbread Co., which produced Big Daddy's  Hot Water Cornbread out of El Dorado, AR. This acquisition was very helpful to Old Hickory as Big Daddy's Hot Water Cornbread is a very well-known product throughout retail and food service industries in Arkansas, Louisiana, East Texas and parts of Mississippi. (For more detail on this wonderful product and the history behind it, click here!) 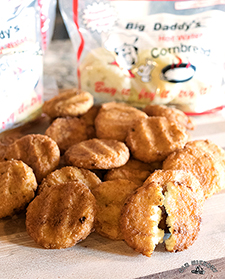 As if that wasn't enough to keep us busy, in the fall-winter of 2017 Old Hickory brought out its much anticipated Regular, Smoke, and Hot Worcestershire Sauces along with the Old Hickory Gourmet Pepper Sauce. These sauces are unlike anything on the market and bring great flavor to any dish and added even more diversity to the Old Hickory line of products.

Old Hickory is still a family-run business that strives for excellence! We are always in efforts to expand our markets, but if you are unable to find our products at your local grocer, they are available in our online store!

Try it out! We hope you love Old Hickory as much as we do!